Since I started using a calcium reactor back in 2004, I've always had 5lb aluminum or steel cylinders, and I have to refill them a few times a year. For the most part, a local liquor store would refill empty bottles for a nominal amount.  A couple of years ago, the owner got a tad picky about said bottles (from others) and demanded that every sticker be removed or they would refuse service.  This included the brand of the cylinder, any logos, you name it. Employees even felt this was a tad silly, but everyone had to comply.  I stood there at the counter chiseling away ancient labels until it was an unmarked cylinder, then they could take it to the back and 15 minutes later I'd have a full bottle again. I believe each refill was about $12 or so.

I've used a few bottles, as it is really nice having a full backup bottle at the ready when one is empty. However, they don't last forever it seems. Stamped into the metal, a date states when the bottle was last inspected, which usually gives you about five years until you have to have each one reinspected for safety reasons.  The inspection tends to cost about $40 or so, and a brand new bottles costs $80.  It's just a minor inconvenience, but the hassle factor made me stop using older bottles and rely on the ones that were still within the timestamp.

Today, I took both bottles I had to the welding supplier instead of the liquor store. I wanted to fill both so the reef would have adequate CO2 for the next few months. Quickly, they took the cylinders into the shop and proceeded to fill them up.  About 10 minutes later a young man brought them to me and told me there was no charge. When I asked why, he informed me that they weren't able to fill them, that each bottle had 1 lb of CO2 in the tank. Knowing that was rather pointless, I decided I better just buy a new standard bottle: a 20 lb cylinder.  Those are the ones used in restaurants and bars for soda and beer. Refills are $20 per tank.  They had a brand new one ready to go, full of C02.  $135 + tax, and I was on my way.

I wondered if it would fit inside the electrical/equipment station where I've always had the cylinder before. If it didn't fit there, I'd have to find a good spot to put it and wasn't really sure that I had a suitable location available. Miraculously, it ended up fitting exactly in the available space inside the stand, a stand I'd assembled back in 2011.  I couldn't be more happy about that. 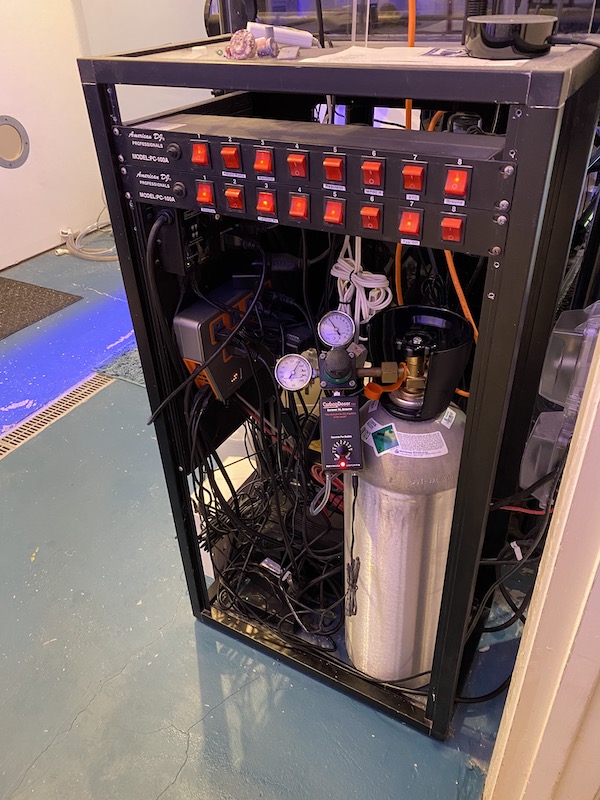 Here's a tank comparison picture. The new one should last a long time, maybe more than a year. That would be nice. 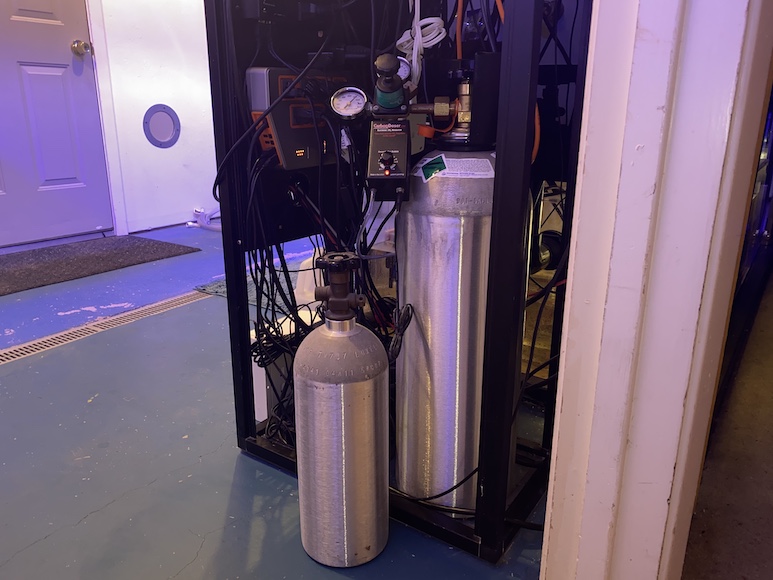 Truly, it's about time.  I resisted as long as I could, but I'm going to just embrace the new purchase and not think about the cost. :)