Every few weeks, I get a message asking me if I'm dosing Prodibio and what specifically am I dosing.  My preference has always been the big four: Biodigest, Bioptim, Stronti+, and Iodi+ which are all dosed back to back during the same session twice a month, on the 5th and on the 20th.

The above picture was taken with the iPhone X in Portrait Mode. I'm very impressed with the camera in my phone. :)

Coral Vits and Reefbooster I don't use as often. Typically the micro food as well as the vitamins change the water's surface tension, which makes the reef sound louder for a few hours. If you just dose Coral Vits, you get a great top down view though.  When you dose Reefbooster, the water becomes opaque almost like milk.  All the fish retreat to safety in their favorite spots waiting for the cloud to pass. It's best to shut off the skimmer when dosing these two items...and both of these products tend to make my skimmer overflow.  I just dump it out repeatedly until it settles down again, and replace what was lost with new saltwater. Basically, a mini water change. Today, the skimmer dumped out 6g of yellowish & watery skimmate, so I replenished with some mixed saltwater I've had made up for well over two months in that tall reservoir behind my reef. Here's a picture of the skimmer overflowing non-stop. It happens to all of us, I bet you feel better now about that. lol 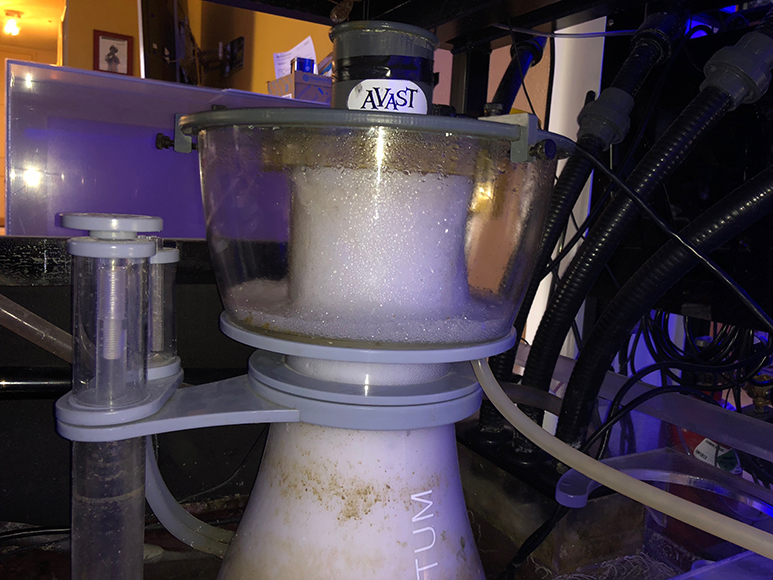 My system has a waste collector with a float switch. When it is full, the skimmer is shut off by my Apex to avoid a mess. I had to dump it out into a handy bucket to resume skimming, but that bucket saved me trips back and forth to the sink or toilet. Actually, I just poured it down the driveway today. 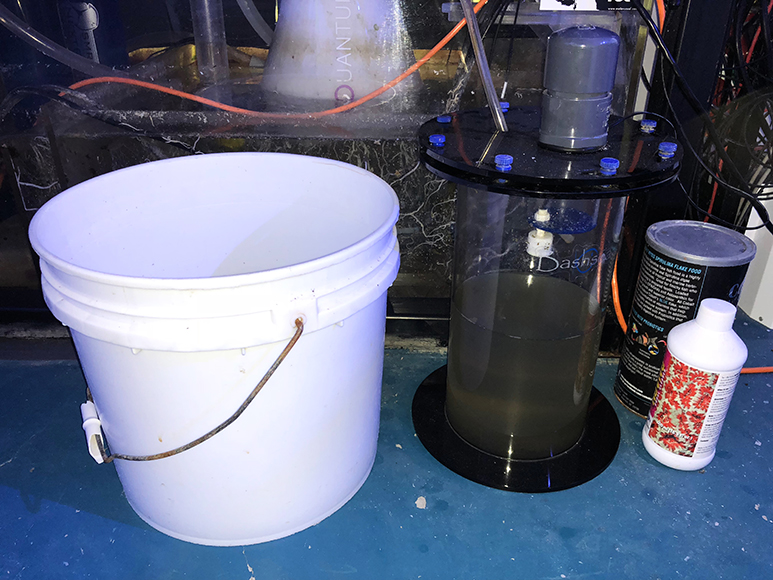 One thing I decided to do today that I never do: I tested the saltwater that has been circulating in the poly tank for the past couple of months. Usually I test it when it's mixed, and then I don't bother again. Once the container has been completely used, then I'll mix up a new batch to test.  So how did this 2 month old saltwater do?

What I found by testing this 'old' batch of saltwater is that the alkalinity had dropped. I mixed up 5 table spoons of Soda Ash (Oven-baked Baking Soda) in a few cups of RO water, and poured it in.  5 minutes later I retested alkalinity and it measured 12 dKH.  Using very loose math, it appears if I need to raise 1dKH in 100g of water, I need one tablespoon of Soda Ash. It's nice to know a measureable value instead of just guesstimating and dumping some in.  I didn't intend to hit 12 dKH, but that number is totally fine for water changes on my reef since I'm only changing out 55g at a time, occasionally.

I'll probably check the alkalinity level again in a few weeks to see if it drops again.