As hobbyists, we appreciate the need for a variety of interesting chemicals at our disposal, and usually we use them without incident. Tonight however was different, way way different. About a year ago I received a package with a few bottles of 35% peroxide. It carried all sorts of warnings on a printout about your skin turning white, but you won't die, etc.  I didn't doubt their warning, but at the same time it seemed rather over the top and semi-ridiculous the way it was written.  I poured a bottle or two into my 265g poly tank to clean it thoroughly, and stored the other bottle in the fridge ever since. At that time, the bottle was bulging, but it was inside a plastic bag and I honestly didn't really care. By comparison, normal peroxide we purchase is 3%.

The container was nice and clean when I was done, by the way. That stuff worked great, without incident.

Tonight I heard a large pop, and initially wasn't sure what that sound was. I wondered if it was just ice dropping in the icemaker, but it was quite a bit louder so that seemed unlikely.  I looked elsewhere in the house and out front, but all seemed normal.  As I headed back into the kitchen & pantry area, I stepped into some fluid that resembled water. I didn't remember dropping any ice cubes that could have melted, but I did what I'd normally do: I took a towel out and started absorbing the liquid to dry the floor. It spread weirdly, it smelled odd, and I started to worry my fridge had blown some line and perhaps this was oil or freon or whatever. It definitely didn't feel or smell like water. I washed my hands with soapy water, and called Bobby. As I've said repeatedly, everyone needs a Bobby.

As we spoke, my hands started burning, and my skin had turned white across the palm and fingers. It was a sting like you'd get from bristleworms, but it active as if you were running you fingers over the bristles. Bobby had my unscrew the back of the fridge thinking this might have been a blown capacitor which contains a little fluid (possibly burnt mineral oil), but that wasn't the case. I opened up the front area under the doors as well, still trying to spot the damage. That's when we saw it dripping from the food compartment on the fridge side, so at his behest I opend the door to see more of this oily clear liquid.

At this point, my feet had begun to burn as well since when I stepped on the liquid initially my socks absorbed it and I was still wearing them during all this guesswork. Those were quickly ripped off. Inspecting the bottom shelf of the door panel, I spotted the 35% peroxide bottle on its side, and when I took it out it was completely empty.  That was the sound I heard, this bottle exploding in the door for no apparent reason. I was in the livingroom, and hadn't touched the fridge and especially not that bottom shelf in some time. 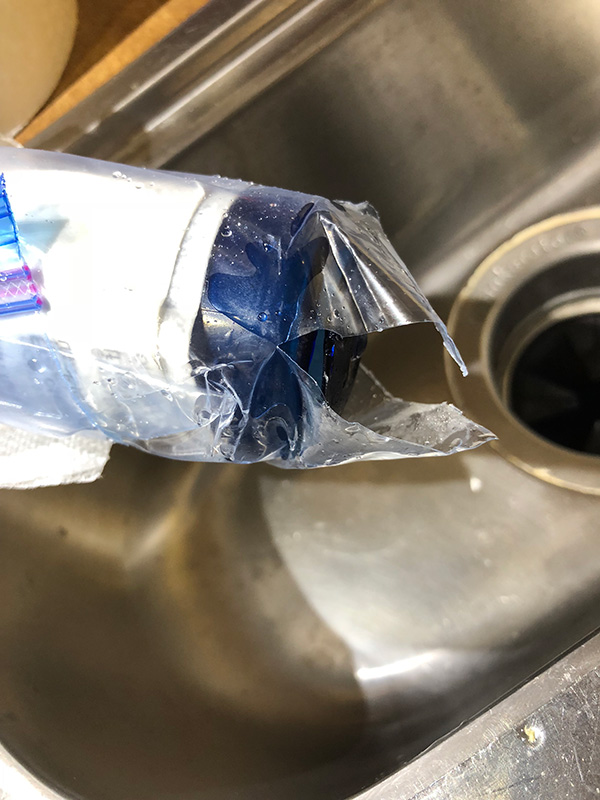 The good news was that my fridge wasn't damaged and the food wasn't going to spoil. Now I just had to clean up the mess. Again, I washed my hands with pumice cleaner, trying to get down to normal looking skin and succeeding mostly.  Then I had to go do the same with my feet in the tub. The floors have now been thoroughly mopped and are drying while I type up this crazy situation. 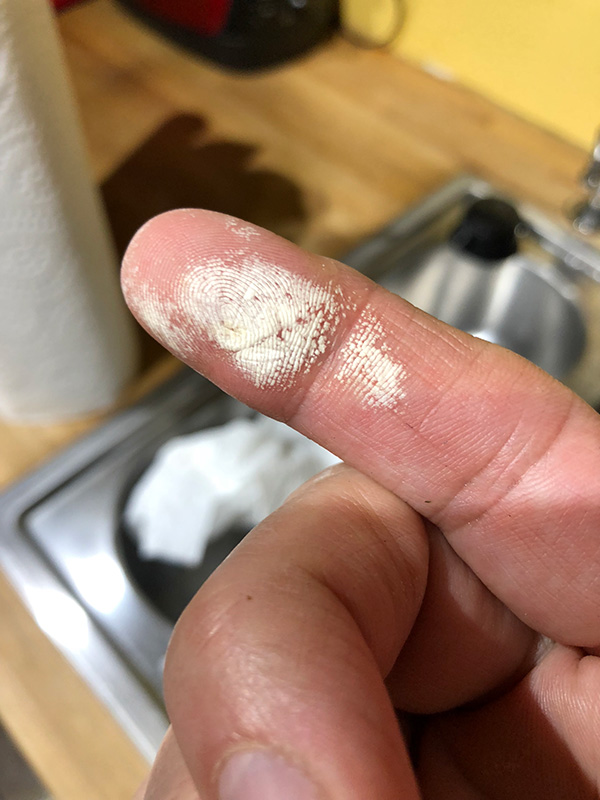 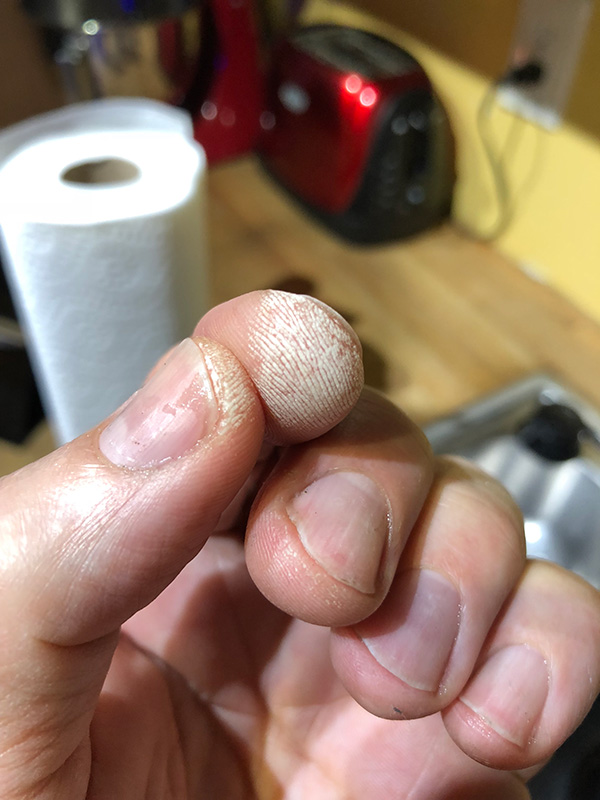 Even wearing rubber gloves with cloth backing, if anything got wet on the fabric side, I'd feel the burning sensation and I was back to rinsing skin under cold water. Is there a lesson to be learned here? Not really, it's just a freak accident. My floors are clean, and anything that made contact with the peroxide is in the washing machine. I wonder if the grout will be whiter where this happened? hehe