I was reading an interesting thread on Reef2Reef about TDS measurements today. I think you might like it as well:

It includes a poll. Check out all the people that own their own RO/DI system and actually measure their TDS too.  That's awesome! 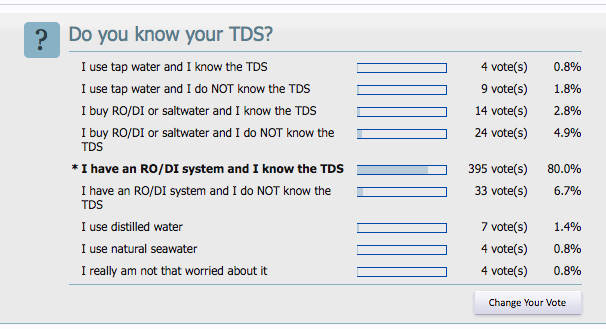 I always test my TDS of the water coming out of the membrane, as well as the water coming out of the DI stage.  I don't test my tap water very often because it doesn't really matter.  One good reminder the original post listed was to measure the RO/DI storage vessel's TDS level, and that's something I'd not done in a long time. I have two acrylic reservoirs under the two different systems, each holding 0 TDS water for top off needs.

I scooped some water out of this ATO reservoir that I built back in 2010 and has been installed under the 400g ever since. I have absolutely no way to clean this container, but it stays sealed shut 99.8% of the time. I've opened the access door on top maybe 6 times in the past 7 years to install the top off pump, or adjust the float valve. My goal is to keep this vessel pristine, because the only way it will ever come out is if I remove the sump first (unlikely) or I cut it out with a sawsall in pieces because there's only 3/4" of space above it -- in other words it can't come out. I really should have made it a little smaller, but at the time I used every bit of space. Seven years, I've had no regrets but one day I'll have to remove it and that will be a project. 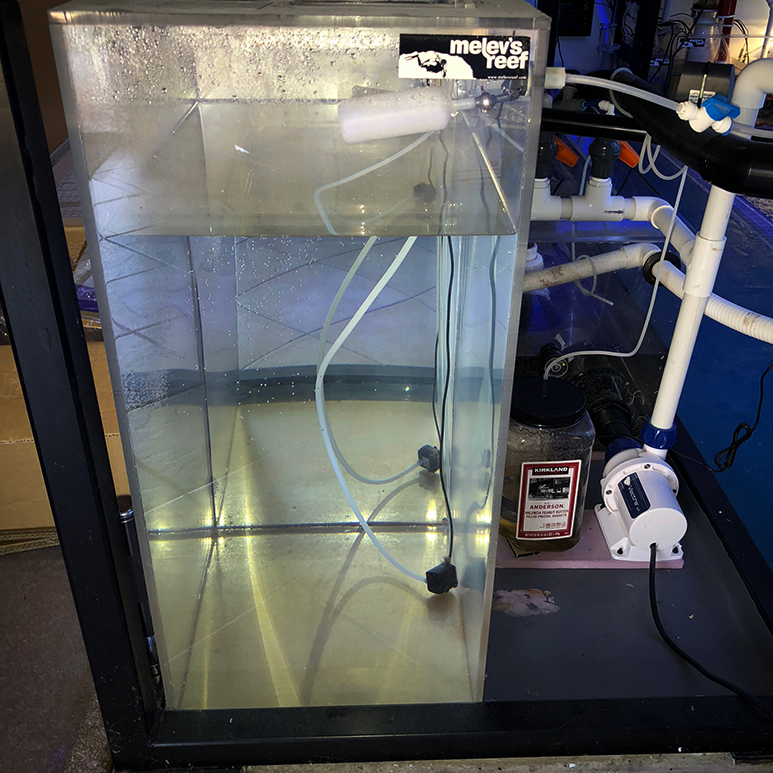 Mathematically, in the past seven years this container was refilled weekly, or 364 times. It holds 45g of water, but usually I refill about 35g per session. Using those numbers, that means this reservoir has received and pumped out 12,740g of RODI water into my sump to replenish what's evaporated.  After all these years, you might think it may have gotten polluted one way or another. Last time I checked the TDS of the water in it, it measured 1.  That was about three years ago, I'd guess.  Today, this is what it measures: 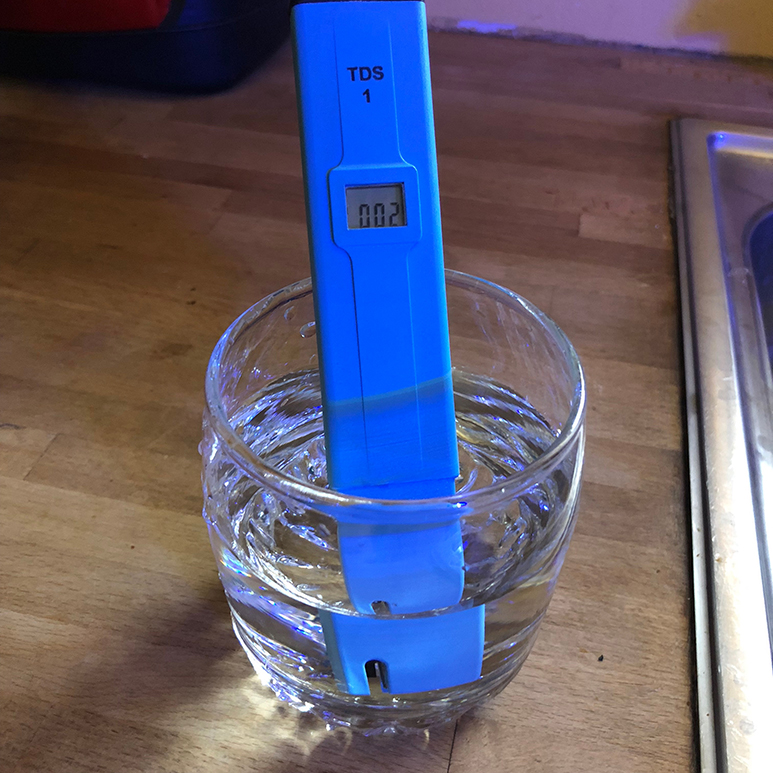 Not bad at all. I can live with that number. :)

Next, I checked the smaller reservoir that sits under the frags system. This one isn't sealed as well, and occasionally I wipe away salt creep that the nearby refugium causes.  This reservoir hasn't been cleaned since it was installed in February 2016, so it's almost two years old.  It holds 7g of water, and is also replenished weekly. 100 weeks x 5.5g (est. refill amount) adds up to 550g of RO/DI water that has passed through it. Today's measurement: 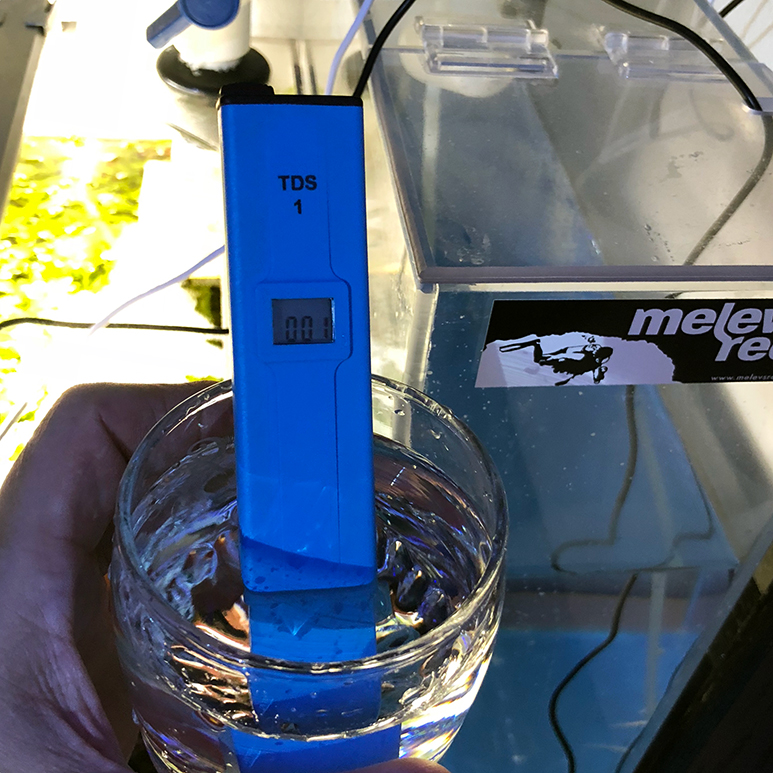 Bottom line, testing these areas allows me to know for sure how my RO system is operating.  I also make RO water for drinking, and that comes from a bladder tank (pressurize water storage for on-demand water need) under the sink. It's measuring 2 TDS, which isn't surprising since my RO's output is 2. Keep in mind, I always bleed off the first 90 seconds of water before collecting drinking or reef water to avoid TDS creep.  If I'd let that 100+ TDS pump into my bladder tank, the TDS of my drinking water would measure quite a bit higher, despite it being diluted with 2 TDS for the next 20 minutes as the tank fills to capacity.

If you are a person that goes to the LFS to buy your water, you very likely have 5g jugs you transport it in. You should be measuring the TDS of the RO water you bring home, to see if the jugs are pure or if they are due for a good cleaning. Over time, those jugs will get contaminated, and a quick TDS test will tell you if you are still getting the pure water you're paying for.  If the measurement is quite high, either the jug needs to be cleaned out with some bleach water (10 parts water to 1 part bleach), rinsed well, allowed to air out & dry for 24 hours... or the water you are buying at the LFS isn't pure in the first place.  You can ask them to put some RO water in a fish bag and measure that at home, or you can ask them to measure the TDS in front of you.  Or both - always double check results to eliminate error.

EDIT 1/9/18:  This was the final post of the thread, boiling down the results into some interesting data:

NY_Caveman writes: The Poll of the Day is over but the poll lives on. I thought I would recap some of the numbers after the big response the poll received yesterday. Over 900 people voted which is a little more than 1% of registered users.

The results were about what I expected overall. RO/DI water is touted everywhere on this site and it appears users do put their money where their mouths are. In fact, I am guessing that people voted in numbers because they were very proud of their systems starting with the best quality water possible. They should be proud. Of course everyone’s system is different. The 12.8% of us who do not own home RO/DI systems and know the TDS are just as concerned as the rest I am sure. We have apartments, no room, small systems, or use other types of water, etc.

Here are some broken down numbers: 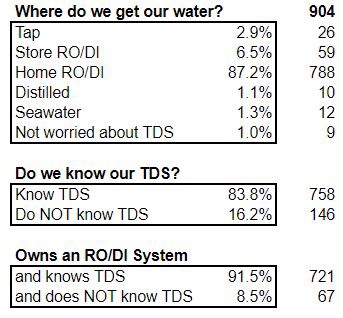 I added that one at the bottom because I found that the most interesting part of the poll. 8.5% of people who have RO/DI systems do not know the TDS. That surprised me. At first I thought, why spend so much on a unit for your home/business and not kick in the extra $20 for a TDS meter? Then it occurred to me, they probably have a set interval to change membranes and resins and it works for them.

I found this poll very interesting despite its lopsided results. Thanks to @dbl and R2R for making it the POTD!