How often have you seen a spectacular colored specimen at a store. I mean, one that knocked your eyes out! Only to find out that it was considered a "Hard to Keep" coral that was shipped in by accident or through mis-identification. Or even worse, bought one of these corals and had it slowly diminish in health and melt away before your eyes. I used to have this happen to me with fish when I started keeping Marine aquariums, and quickly came to the realization that it was better find out as much as I could about that fish before making a purchasing decision. This of course led me to gain knowledge about the habitat, and food source of these individual fish. This in turn made me a much more successful hobbyist, and made me realize that there is always something new to learn. When I started keeping Reef Tanks, I almost had to start all over again, and this time the learning curve has been even steeper! Anyways, I would like to say that what we think of as hard to keep specimens might not be that hard to keep. But rather, that it’s hard to duplicate the habitat where they thrive and grow, the ocean. With that in mind, I would like to discuss one of these corals, and try to delve into what you might do to keep them alive and growing in your systems.

Stylasteridae:
Actually they are members of the class Hydrozoa. Corals of this type have been finding their way into the local stores in the past few months. There are fifteen genera in this family, Stylaster and Distichopora are the two that are most commonly seen by the hobbyist, the latter being more common. Characteristics of these corals include the following; they are colonial, ahermatypic (which means that they are non-photosynthetic), and usually arboresent or tree shaped. Colors are often very brilliant hues of reds and purples. They have small tubular hairlike tentacles called gastrophores which capture appropriate sized food from the water column. Learning a simple important fact like this can help us keep these corals with more success.

Stylaster are found worldwide, including the Arctic and Antarctic. There are 48 nominal species, and an unknown number of true species. This genus has fine branches which grow on one plane, much like a sea fan. The skeletons are quite hard, and the corals color is present all the way through to the core, unlike the calcium skeleton corals. Stylaster is distinguished from Distichopora by virtue of its having cyclosystems, or polyps arranged in a circle just like the fire coral Millepora. These are less commonly seen in stores than Distichopora. 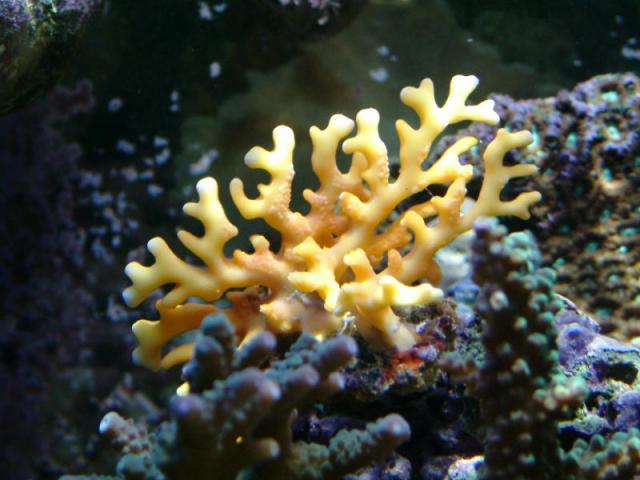 Distichopora are found only in the Pacific Ocean. There are 34 nominal species and an unknown number of true species. This genus has flattened, blunt ended branches which are uniform in size and also growing on one plane like the Stylaster. But unlike the Stylaster, there are no cyclosystems, and the gastrophores are aligned laterally along the edges of the branches. These have been coming into the stores generally in good condition, but are slowly being fouled by slime algae and diatoms. Of those sold, not many if any will survive. You must be aware of what they need to survive, and grow. I have had one for several months that not only seems to be surviving, but also seems to ecomorphing ( or showing new growth to better fit) to its new environment. This is a bright red specimen that came in as an acropora on the CITES sheet, and was listed as “Burning Embers” as the common name. I usually take a dim view when it comes to slips like these, and wouldn't recommend that these as a species should be imported.

My research into the captive care requirements came up with no concrete scientific data that showed what they eat, or if anyone has successfully even kept them before for an extended amount of time in a closed system aquarium. But one book did say that they needed "very small plankton." While not unusual ( as we are really as aquarists, just beginning to learn about the biological side of our systems), it is sometimes necessary to rely on anecdotal evidence in order to get to the point of being able to even begin to provide the correct husbandry required to keep some specimens alive. However, in this case, even the experts didn’t have a clue. The literature that I did read provided a few clues including the fact that they are sometimes common under overhangs or on the roof of caves. Let me play Andy Rooney on 60 minutes here for a minute, does it seem to be that all hard to keep corals are from these locations? If so, I would say to the collectors out there to stop going in caves! I mean, it doesn’t take a rocket scientist to figure out that most hobbyists tanks don’t resemble these areas in the least. Although this does bring up my next point nicely.

If we do want to keep these corals, setting up a system particularly for these species is a good idea. This is called Zonation, and it is an idea that is gaining in popularity. In Volume One of The Modern Reef Aquarium, they discuss different types of systems that might be set up for the care and husbandry needs of certain animals. They recommend a "cave aquarium" for this species. This allows us to mimic their natural environment somewhat. There are some possible ways as I see it to keep these corals. I think that a natural type system that produces a natural food source in the way of phyto and zooplankton is the best way to go when discussing these types of organisms, also heavy particulate feeding might help. The most important thing is that the system is slime and diatom free. I will keep you apprised of my progress with this species. If you have a "hard to keep" coral, please share your experiences with us [hobbyists]!