If you follow my youtube channel, you've probably heard how I have to get my arms wet and really cull the 400g reef because the growth at the top is shadowing everything beneath, and those things beneath have little chance of living. I hate to have to rip out these big colonies, but there's no choice. Here are a bunch of pictures of the tank today. I've also included some images of the Anemone Cube.

Biggest thing to happen recently was an alkalinity dip. When I see some coral turn white and bleach, I always think it's because of shadowing instead of being a smart guy and testing alkalinity, and yet it again I was wrong and water quality has dropped somewhat. Alkalinity was measuring 7.5 dKH and the big acro at the top took a hit. I was able to correct that mistake, and dosed some buffer to bring it up while adjusting the calcium reactor's melting point a bit lower to increase the total alkalinity of the tank. The effluent coming out of the calcium reactor measures 20 dKH which is perfectly good. (Typically this can measure between 19 and 35 dKH, so 20 is a good number.)

Most of these pictures are going to be displayed under 10,000K lighting because I just don't like sharing blue-hued images. Here's the eye candy as of now, starting off with a full tank shot. 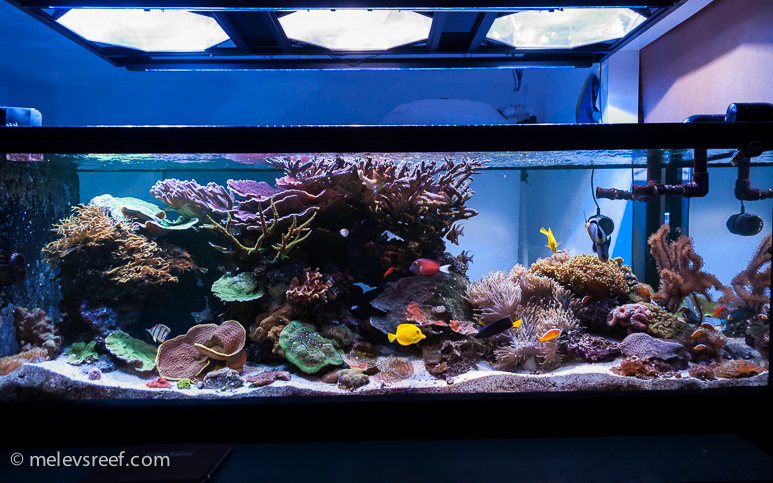 And an angle from the view at my desk. 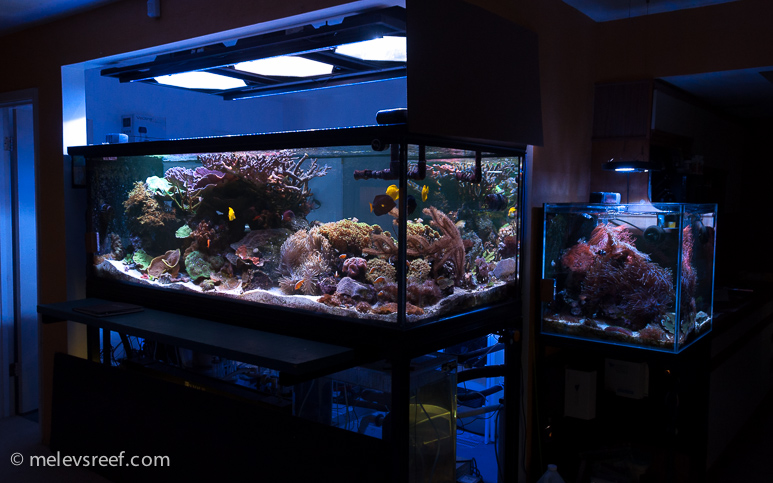 Some of the Bubble Tip anemones are actually bubbling! 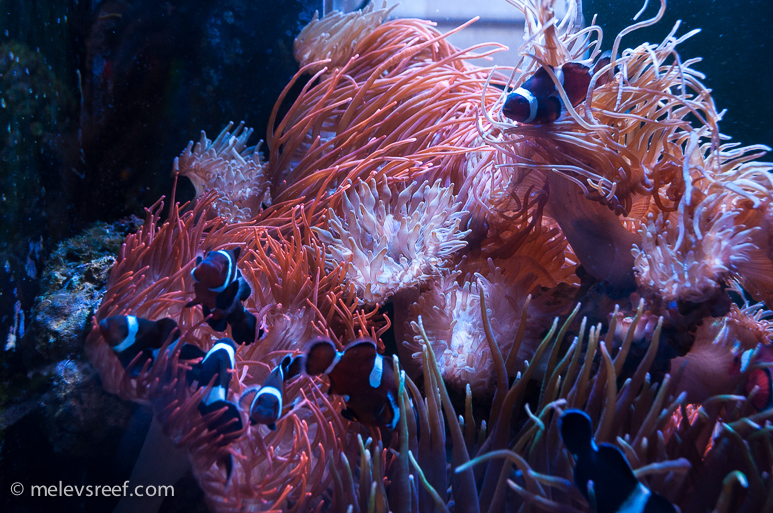 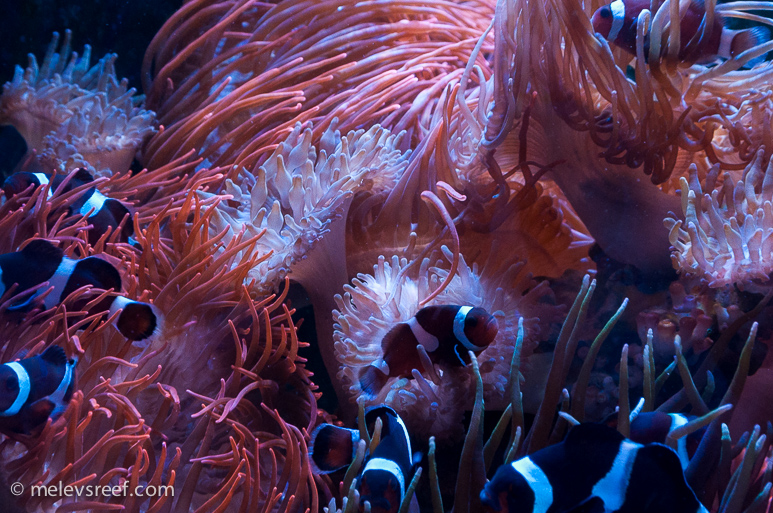 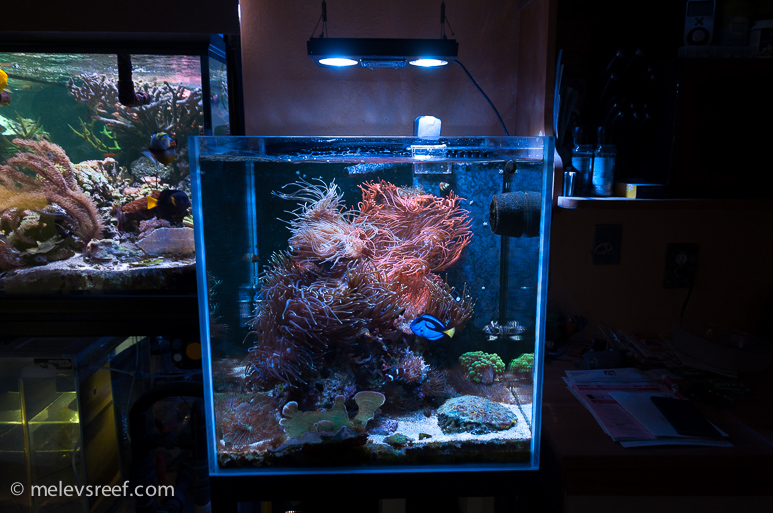 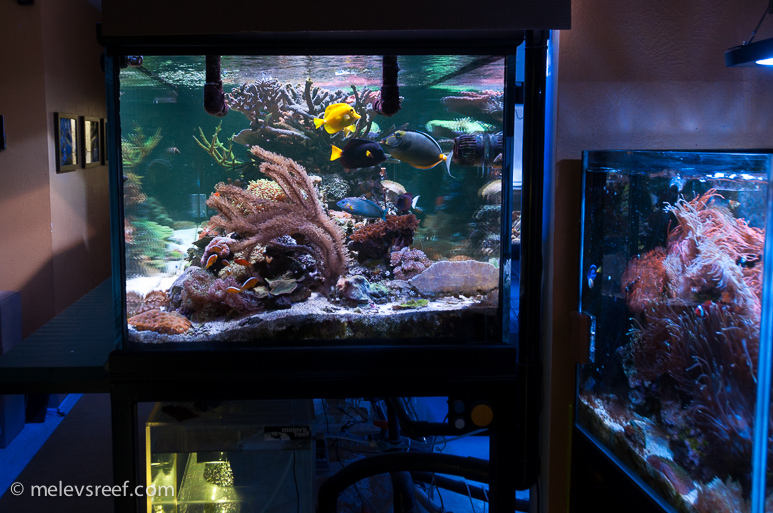 This chalice always gets envious attention by visitors. 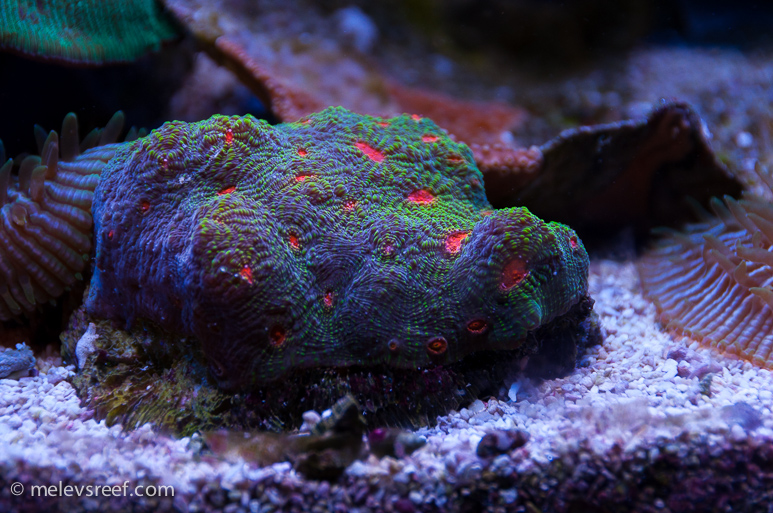 Some of my hammers. The anemone (lower left) has probably killed off nearly half the colony as it wandered through the hammers over the past year. 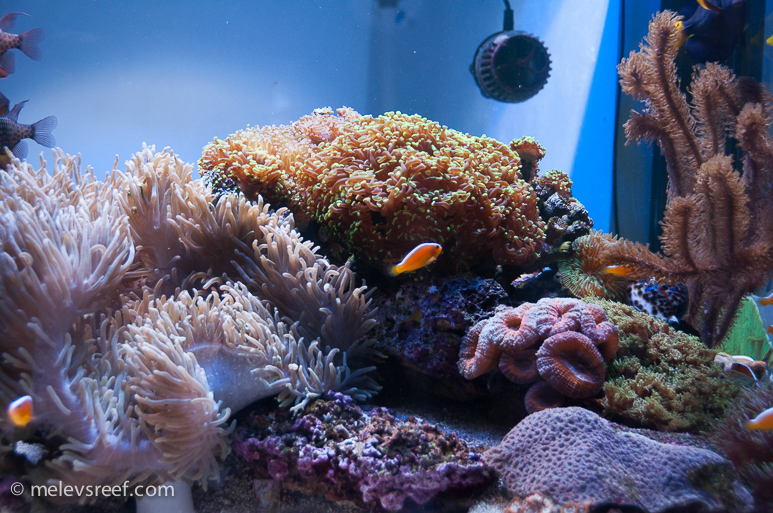 I've had this Lobophyllia for years. Totally different color from above. 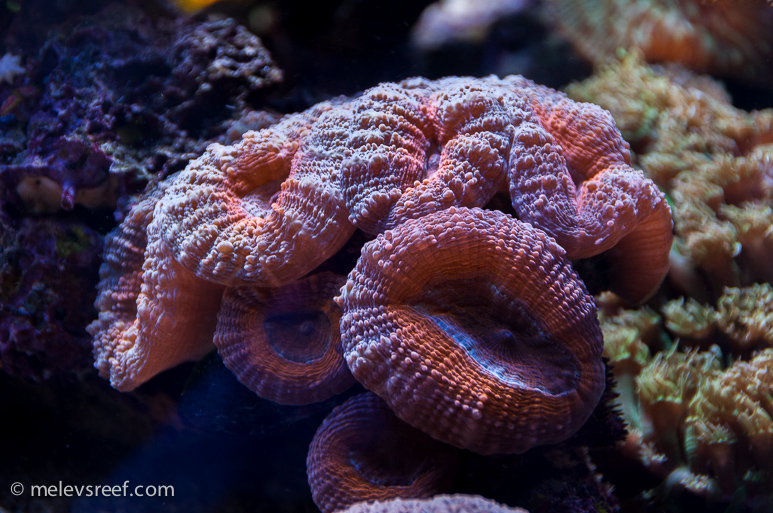 End view of the front section. The water's a little murky because I haven't run carbon in a month. 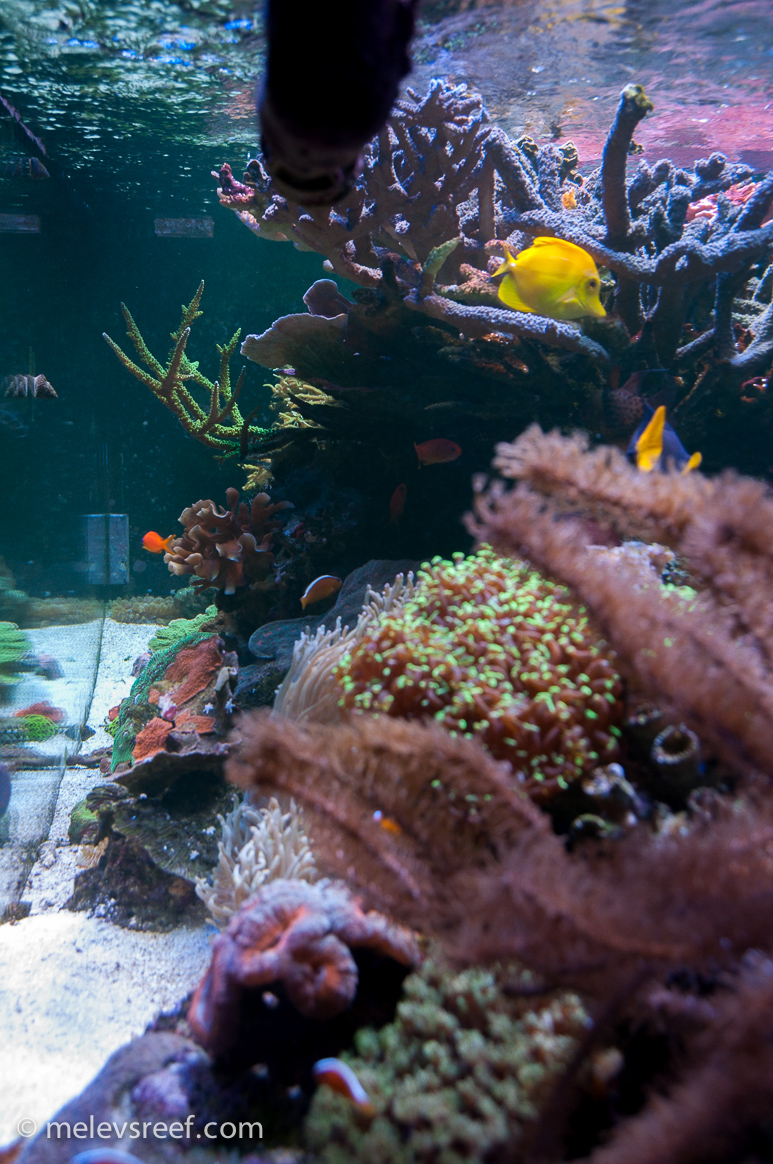 End view of the back half of the reef. Some of the Montipora table toward the back glass, but I can still run a cleaning magnet without hitting them. See Spock? 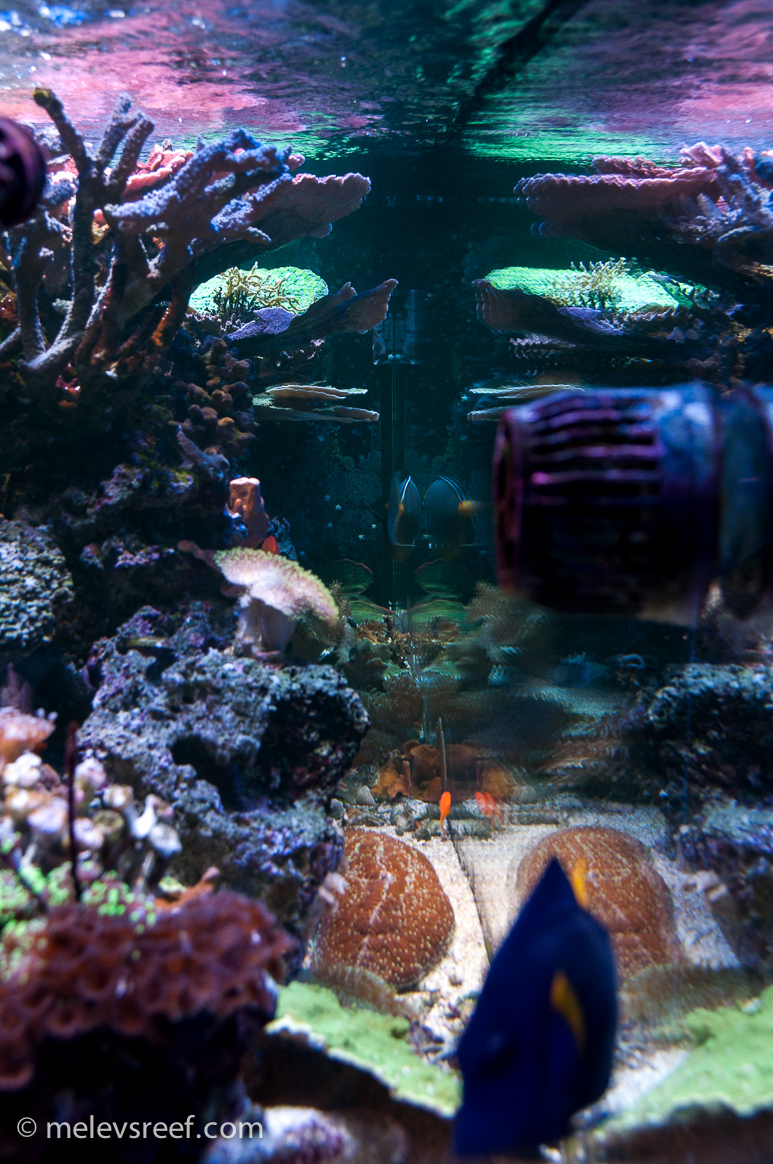 Horrible picture of my ORA captive bred mandarin. Sorry, it was just in the worst spot when I was photographing, but I wasn't going to leave it out of this update. I've had this fish since 2011. 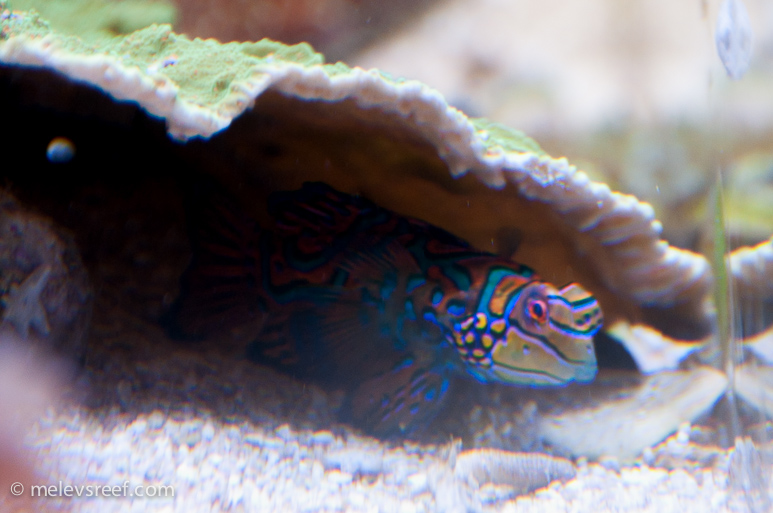 This it the Montipora the Mandarin was beneath. This is a pretty big colony. 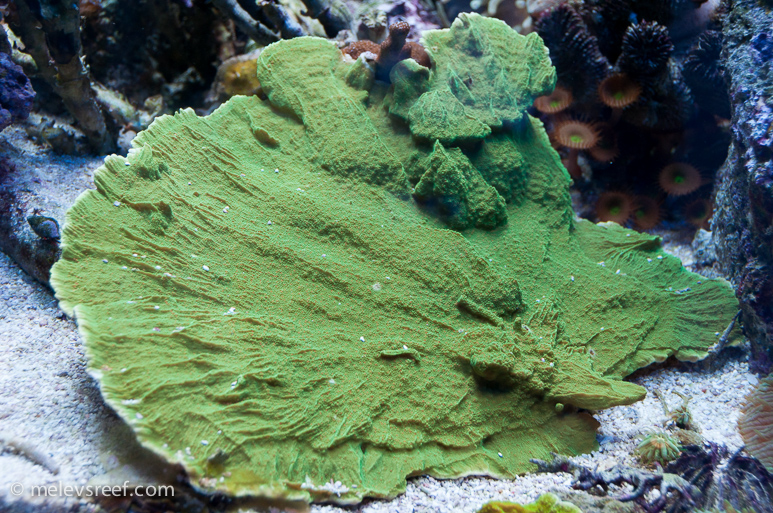 And a close up of the orange polyps.

Another interesting Montipora, with blue polyps. 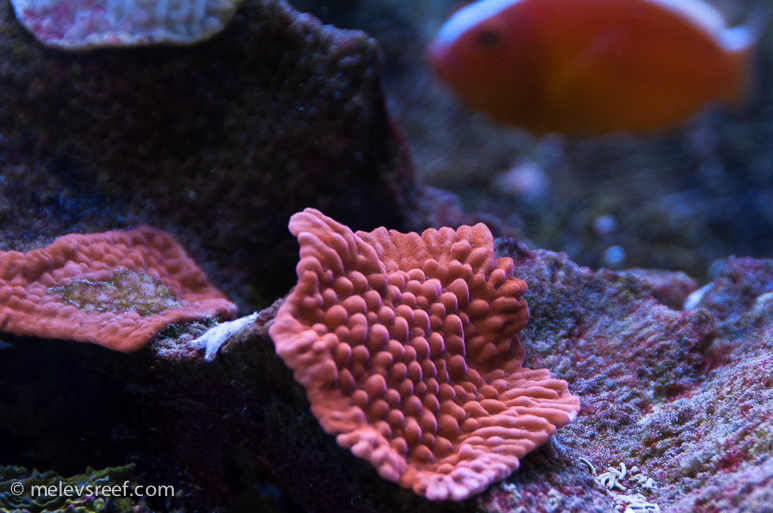 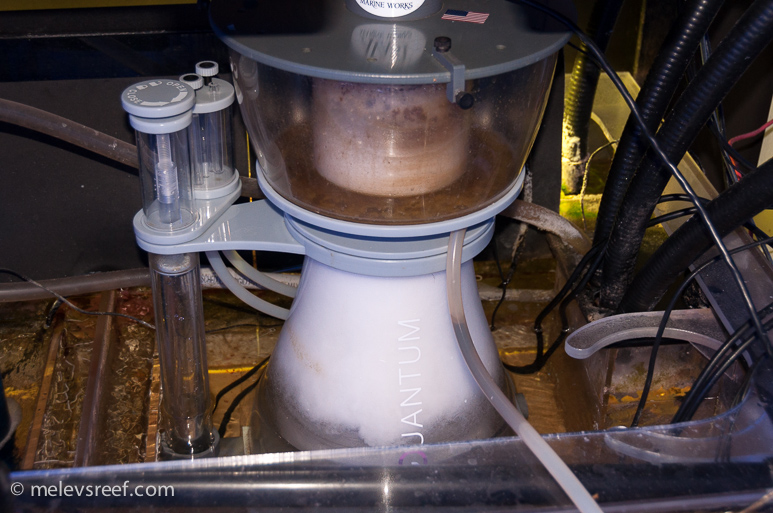 The Sebae anemone was recently placed back in this spot and for now has stayed put. 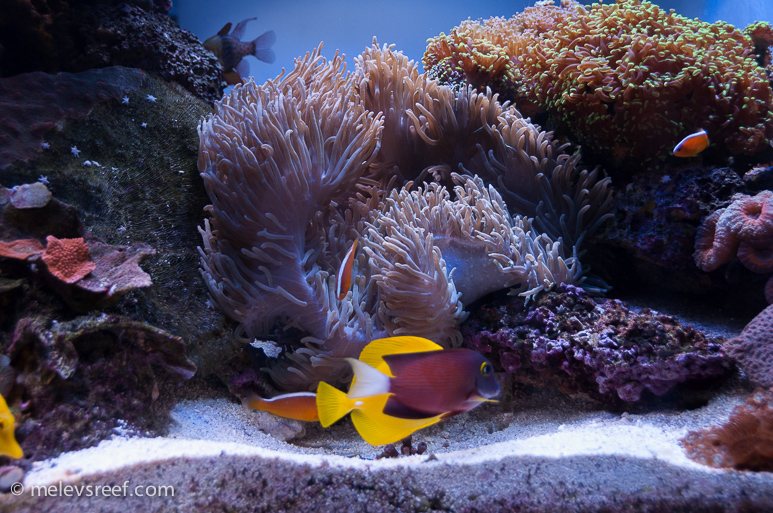 The skunk clownfish have been migrating somewhat. Here you see them in Pagoda and Duncan corals. 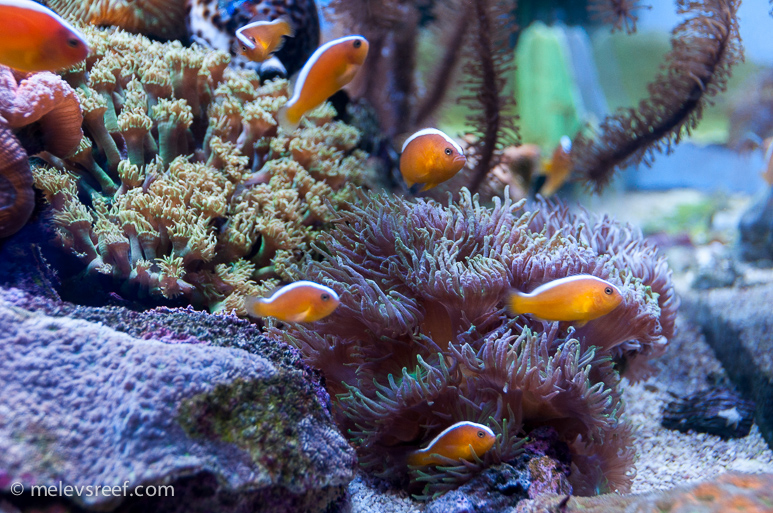 This top down view at the surface helps you see the size of the colonies. Remember the tank is 36" wide, front to back! These corals have stretched across fully. And that's the latest; maybe be the 3.5 year update, there will be a big change if I find the time to tackle this project and start breaking everything up to reset and open up some space. I really don't want to touch it, but it's long overdue. 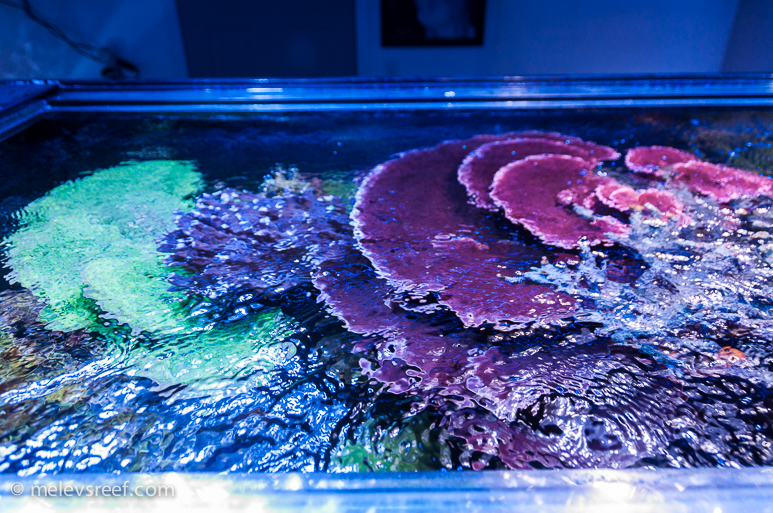