Each year, I like to do a video on the anniversary date of the reef.  Last month, my reef turned 9 years old (Nov 10, 2022).  By that, I mean the livestock has been in this glass aquarium for that duration. I filmed it from many angles, to make a nice video (linked at the base of this article).  I’ll describe my system and the associated gear while you enjoy some eye candy. 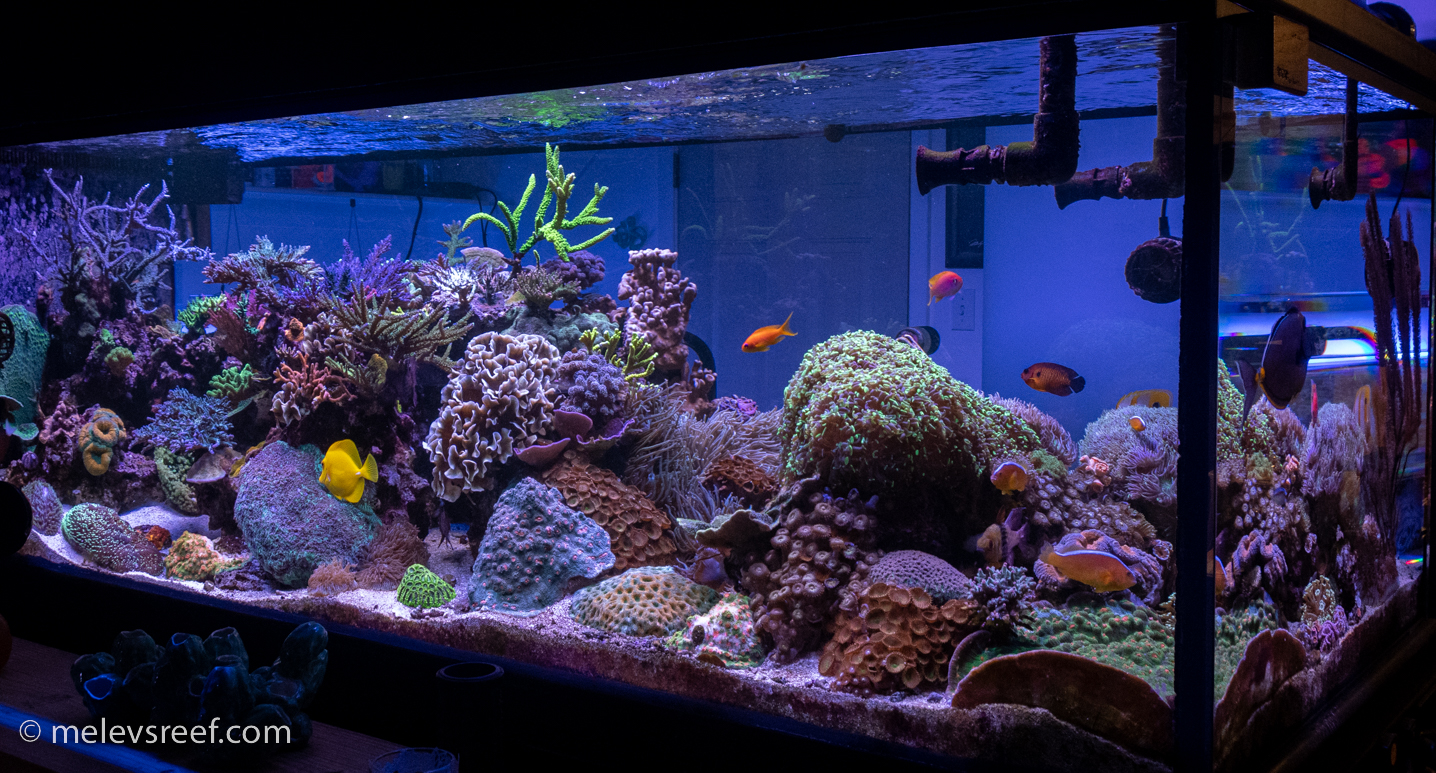 The 400g is made by Marineland. It’s custom made to my design, 84” long x 36” wide x 30” tall.  It has inner bracing around the base, as well as doubled-eurobracing at the top.  An external overflow box with four one and a half inch drains hangs off the far end, making this a peninsula tank.  The three viewing sides are made of Starphire glass which is 3/4” thick.  The base panel is 1” thick.  To hide the overflow box at the far end, I had them install a black acrylic panel that is glued to the glass, making that end of the aquarium 1” thick.

Fortunately, that thickness was still within the tolerances of the Vortech mp60 pumps.  Two of those are magnetically coupled beneath the overflow, and the drain plumbing was routed around those pumps and down to the sump.  Additional flow comes from a mp40 Vortech near the other end to give the LPS gentle current beneath the returns. 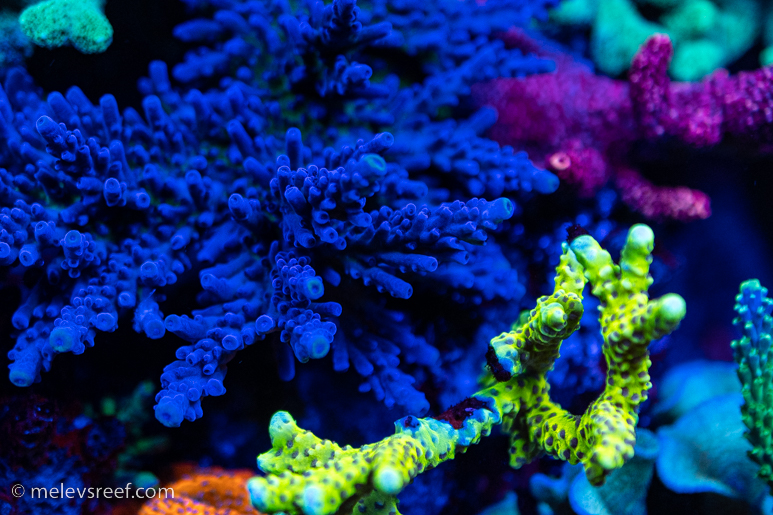 The return pump is the Abyzz a200, plumbed to 1.5” spaflex PVC that curves back up to the display tank. The plumbing continues that size to a manifold that pushes water out three outlets.  One pushes water into a reversed-check valve that is installed above the water, and the other two outlets reduce to 1” diameter plumbing for the Flex Random Flow Generators.  Those flow accelerators generate randomized flow back into the reef without moving parts, and it’s amazing. 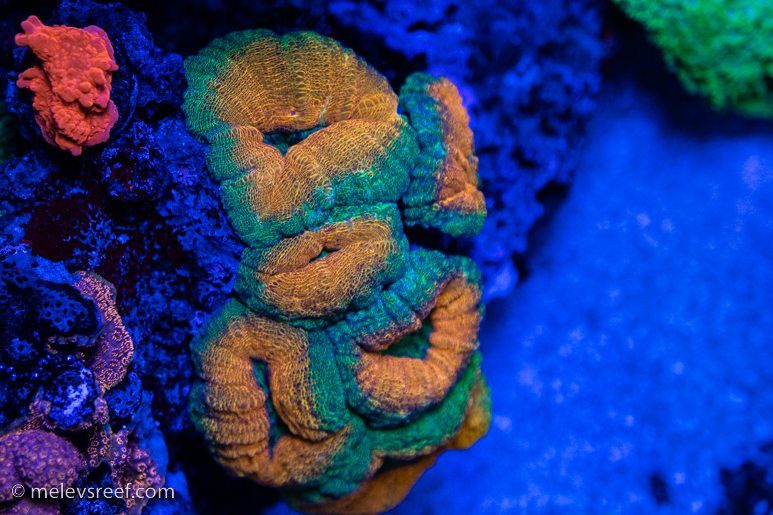 Despite all that flow, I don’t have issues with my deep sand bed moving much at all. Occasionally I need to rake some of it back to a preferred area.  The Vortechs run four different modes during their 24 hours schedule, constantly changing it up.  The Abyzz, however, runs at 80% all the time.  I have tested the pump at 100% power to assure the drains can keep up, which they do nicely. 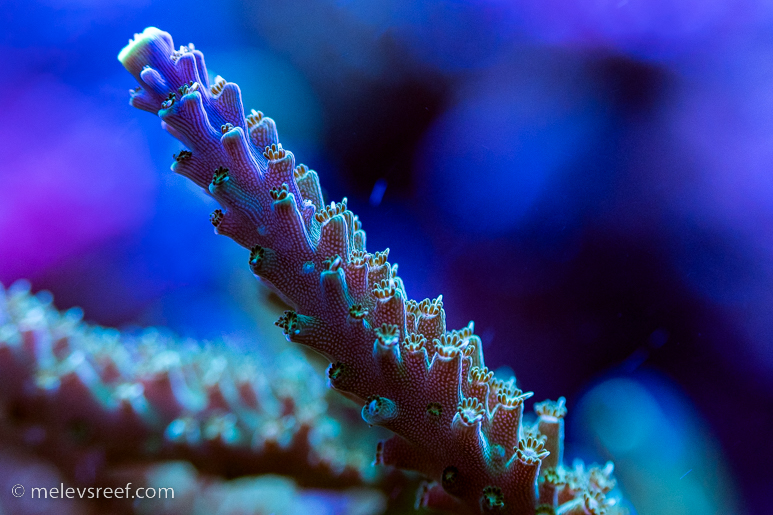 The drain assembly uses four pipes.  Two are full suction, using gate valves to regulate their flow.  One goes to the skimmer section, the other to the refugium.  A third drain trickles water in the Sock Box, which is hardly used these days.  The fourth drain is dry, but if something were to go wrong, it would fill with water and also drain into the Sock Box.  The Sock Box is a modular item I built to hold a 7” sock, but could be removed entirely if desired.  Occasionally I will run a sock for deep cleanings, but the rest of the time it’s unnecessary. 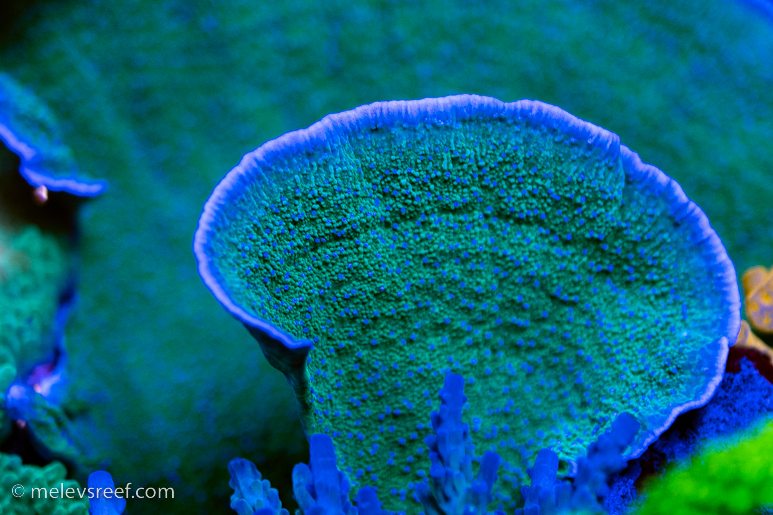 I’m still running the Nyos Quantum 300 skimmer, with two accessories.  The Skimmer Swabbie uses a motorized squeegee to keep the neck clean, so I don’t have to remove the collection cup for cleaning but once a month.  The waste collector catches the skimmate, and if it fills all the way up, will shut off the skimmer until I empty it.  Those two accessories make running a skimmer a breeze. 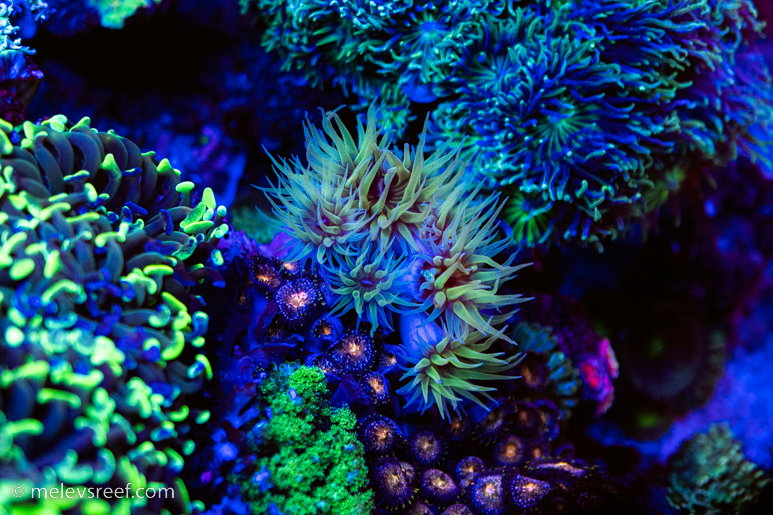 My reef uses three 300w heaters, which are installed in a heater hanger bracket between the baffles of the sump.  All the water from the skimmer section flows over and around those heaters, progressing into the return zone. This assures the heat is being utilized efficiently.  Even when doing water changes, the water between the baffles can not drop due to the design of the sump, so the heaters are never exposed to air which could lead to breakage. They are very safe in there. I use the Apex to control the heaters, which tend to come on about twice a day to maintain tank temperature. 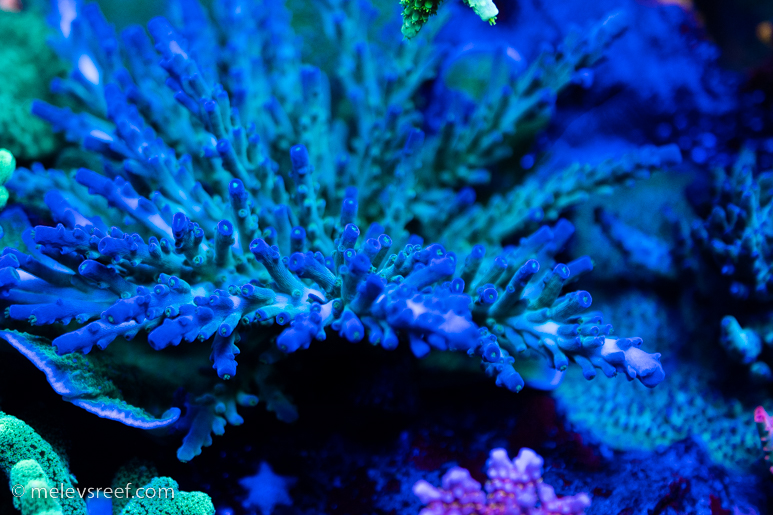 The refugium is filled with feather caulerpa, and the substrate is Reborn calcium reactor media.  I use a XHO daylight LED fixture that uses a combination of 5100K and 6500K diodes.  Once a month, I’ll pull out a hefty handful of macro algae, usually to give to someone else. 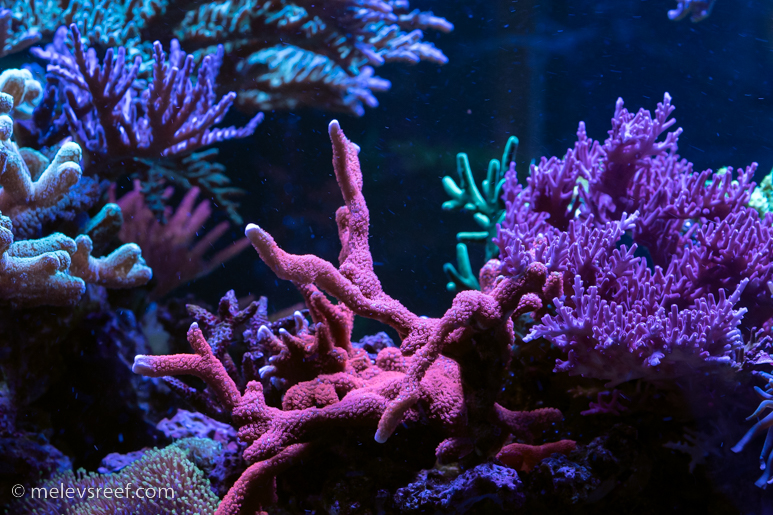 In addition, I have a algae turf scrubber that grows green hair algae on the screen. I usually remove about a pound and a half every two weeks from the screen.  The turf scrubber is on an acrylic stand I built, which is located above the rim of the sump over the area where the heaters are.  Beneath its drain, I have a 4” mesh sock to catch any loose algae bits that may escape. 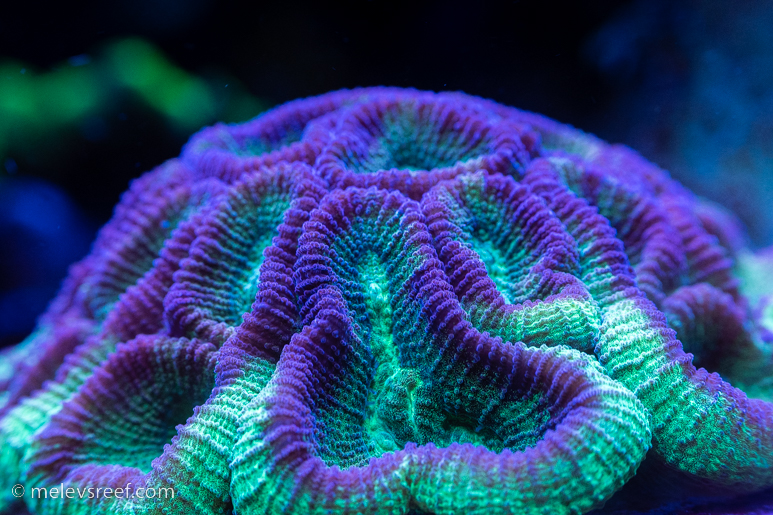 Rather than dealing with two part, I run a calcium reactor for my reef.  It contains Reborn calcium reactor media, which is constantly yet gradually melting due to the lowered pH level within the reactor. Using a 20 pound CO2 cylinder, that gas is slowly fed into the reactor with a carbon-doser at the rate of 1.2 bubbles per second. A pH controller regulates that Co2 flow, adding it only when needed, and shutting off the flow when enough has been added. A Versa pump pushes water slowly into the reactor at the rate of 60ml per minute.  According to Mobius, it pushes 86 liters of fluid through the reactor in a 24 hour period. That’s 22.7 gallons of alkalinity and calcium supplement daily.  The effluent coming out of the reactor tends to measure anywhere between 19 and 35 dKH. 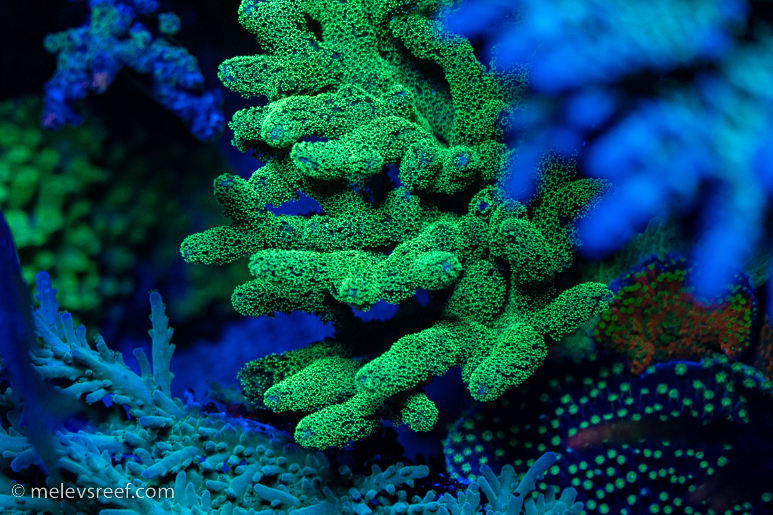 Top off is handled automatically by the ATK, a kit that works with the Apex controller. I have a 43 gallon reservoir next to the sump under the reef that will easily top off evaporation for 10 days.  About once a week, I open up a valve next to the RODI system to refill the reservoir with more 0 TDS RODI. I’m using one of my own RODI systems, the 150 gallon per day boosted RODI from Melev’s Reef.  I replace the filters every six months, and the DI cartridge when need be, usually after 7 or 8 months. 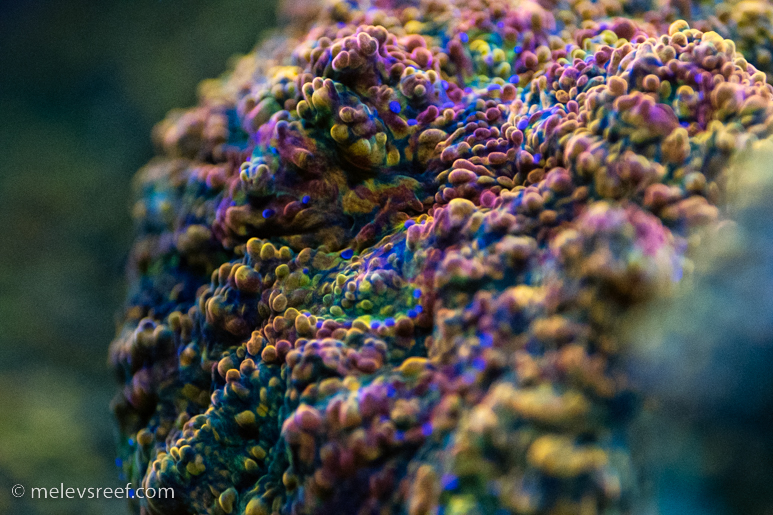 If the tank runs a little warm, I have three 120mm cooling fans built into the rim of the sump to blow down on the surface of the water, which keeps the temperature from rising.  If the tank gets even warmer, the Apex sends me a notification. 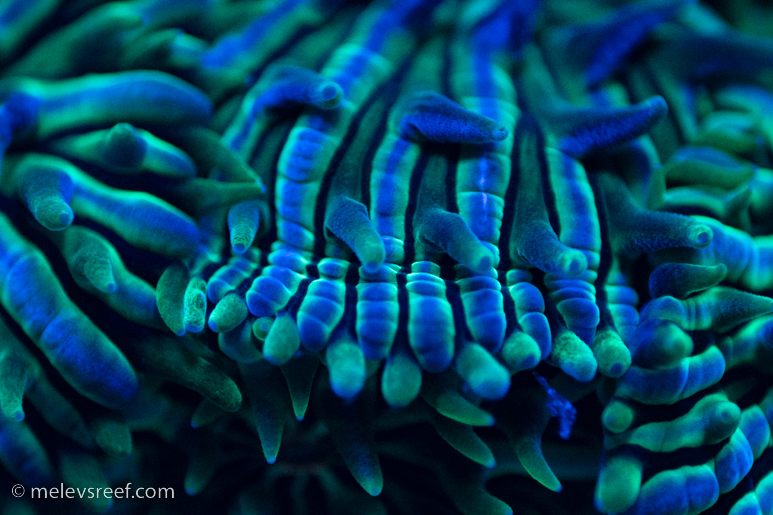 Speaking of the Apex, I’ve been using this controller since 2004. Back then it was called the Aqua Controller 2, then later the Aqua Controller 3.  That was later replaced by the Apex, now often referred to as the Apex Classic. In 2016, a new version released, which is called the A2 Apex Controller.  Two months ago, Neptune Systems released the A3 Apex, but the A2 is working just fine for now so I don’t intend to replace it any time soon. The Apex controls quite a bit of my gear, or allows me to control specific things on demand, using the Fusion app or some mechanical momentary buttons.  It also monitors things like temperature, salinity, pH and ORP constantly, graphing those results for me to review any time.  It also monitors energy usage. If a pump uses more or less than what would be expected, it will notify me there is an issue with that device.  It also monitors the voltage coming from the city, and recently tracked just how eccentric it was being delivered by the power company.  Once they finally corrected the issue, I was able to see that data, that the power was clean and consistent once more. 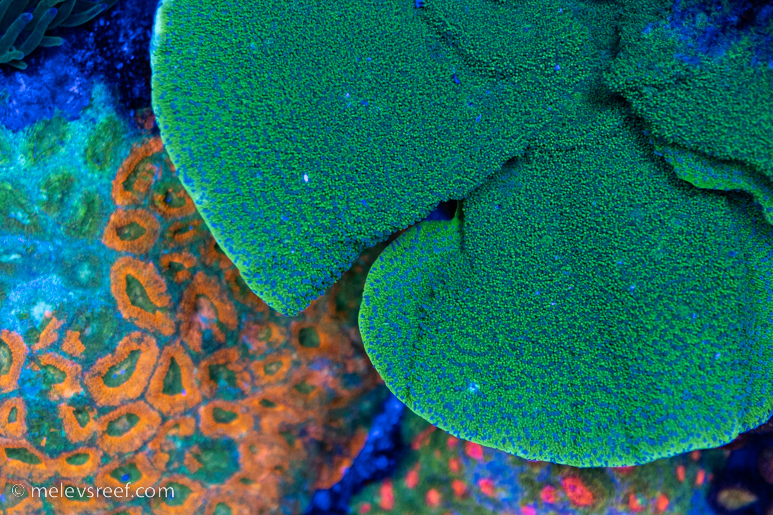 I run the Trident, an automated water tester that checks alkalinity, calcium and magnesium several times a day.  This allows me to use those numbers to control the calcium reactor. If the alkalinity gets a little higher than I want, rather than making micro-adjustments of the calcium reactor, the Apex simply suspends the flow of CO2 for a duration  until the next testing period.  This has really made my life easier.  The reagents are replaced monthly, and I still do my weekly water testing of all parameters just to double check everything. For that, I use Elos test kits with the Smart Stir magnetic stirrer. 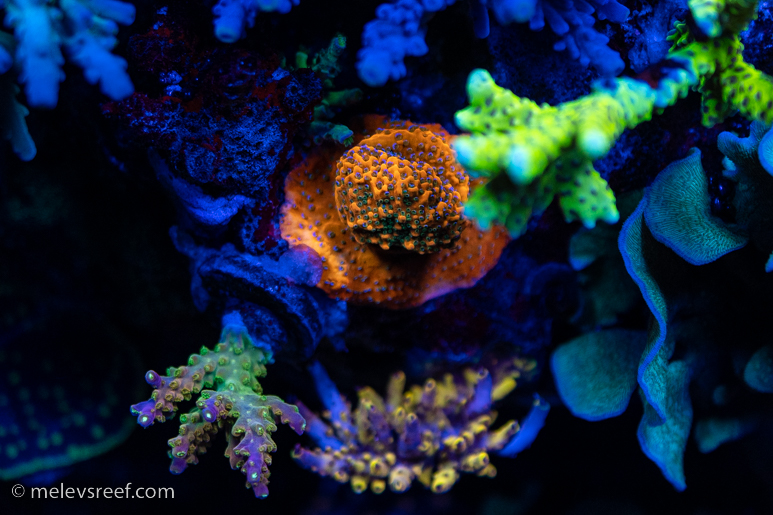 The reef is lit with three Neptune Sky fixtures, and as you can see the corals are growing nicely and look just beautiful.  I’ve been using these lights for a year and a half and love them.  I also have two super actinic XHO LED strips that run daily. 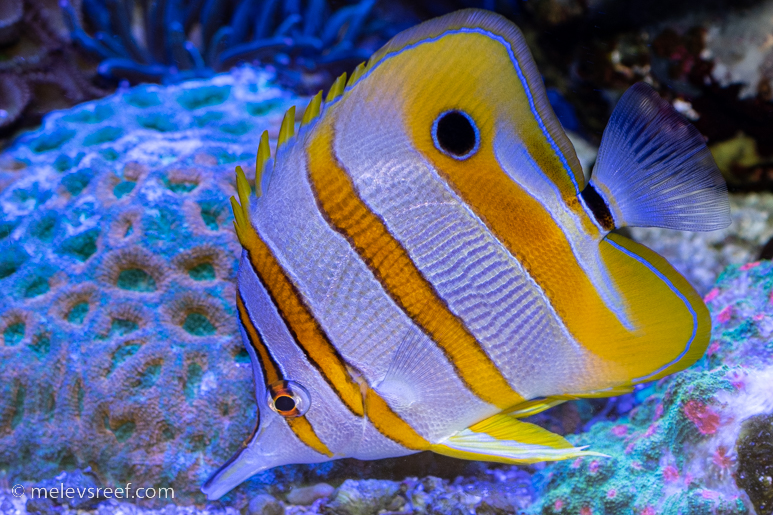 Other things that I dose:  Magnesium for 80 ml per day.  Potassium if the number dips below 400 ppm. Prodibio’s Bioptim, Biodigest, Iodi+ and Stronti+ are dosed every 15 days. And starting a few months ago, I began dosing specific trace elements like Vanadium, Manganese, Molybdenum, Cobalt and a few others. Using ICP testing, I measured what was being dosed to tweak the right amounts so as not to accidentally overdose anything that could affect the reef adversely. 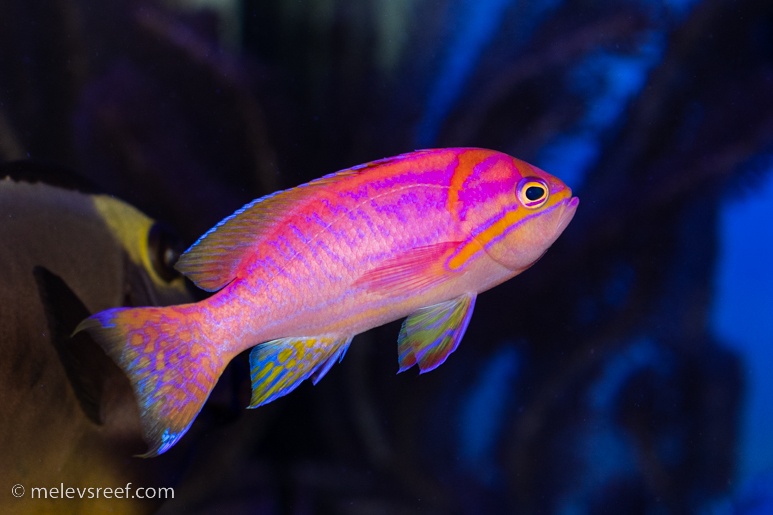 The reef is fed a mixture of frozen food nightly.  I break off chunks of Rod’s Food original blend & polyp poppers, plus I add some Hikari mini mysis as well as some PE mysis into a small bowl.  Once thawed, I turn off the return pump and skimmer using a momentary button with the Apex, and then will broadcast feed that food into the reef in two different locations.  Within two minutes, the bulk of it is gone.  The finer particles are ingested by the reef.  After 10 minutes, the Abyzz turns back on, and five minutes after that, the skimmer resumes skimming.  I clip nori to the glass several days a week for the tangs, and when I think about it, mix up a cup full of Benereef to feed the corals.   I never target feed anything directly. 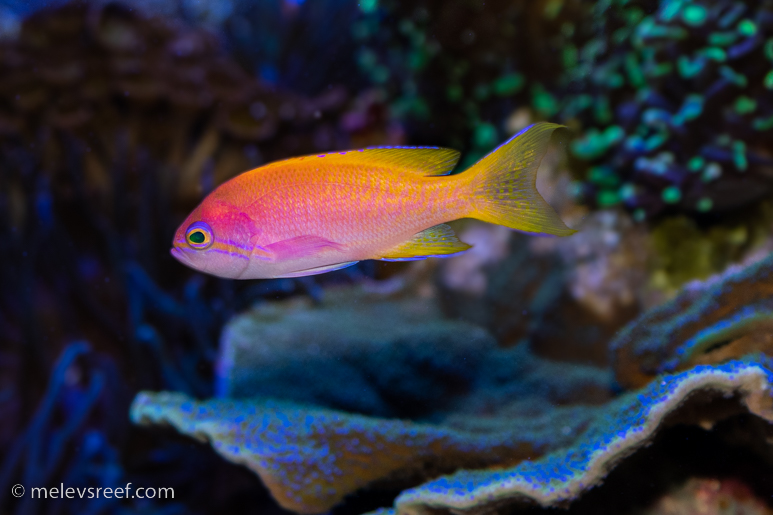 It appears that I do water changes about six times a year. When I do, I use Salinity salt by Aquavitro. I always check to make sure the alkalinity, temperature and salinity match my reef before proceeding. I push the water change button that turns off a lot of equipment for a 20 minute period. Water is pumped out of the sump and sometimes out of the display, and then new water is pumped into the sump.  The equipment resumes automatically when the timer expires. 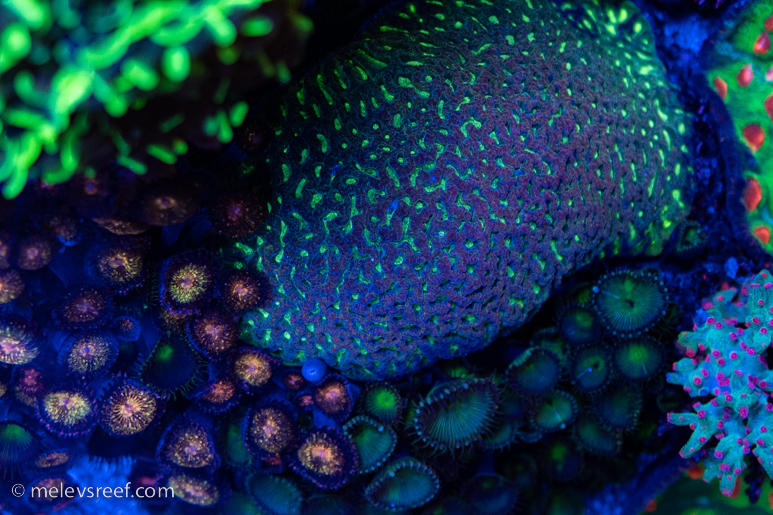 For phosphate control, I use Phosphate Rx.  I seem to be dosing that every 6-8 weeks, which comes out to 6 or 7 times a year.  A typical dose is 125 drops, which are added after lights out.  The next day, the water is nice and clear again, and the phosphate level has dropped back to where I prefer it.  Nitrate has risen this past year, and I haven’t found a nice solution for that one yet. 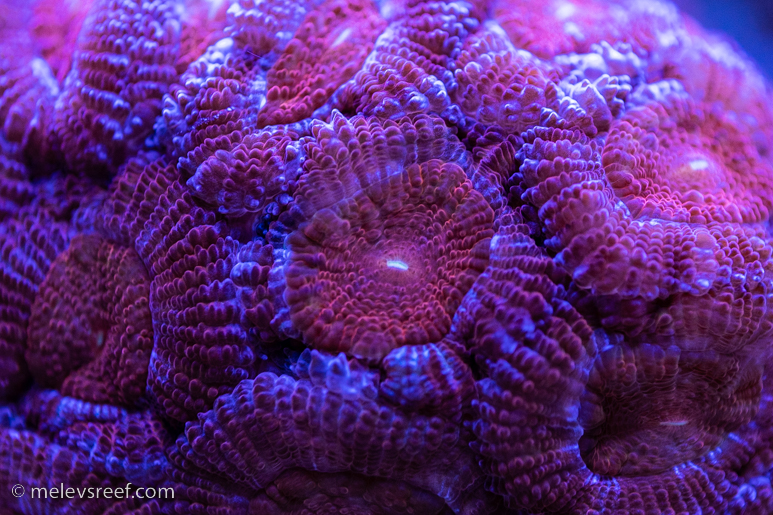 This year, I added a few new corals and a few new fish. The Achilles tang is my latest addition, one I’ve always wanted but never dared purchase. It’s half the size of Spock, my naso tang… and it seems like everyone is getting long swimmingly. 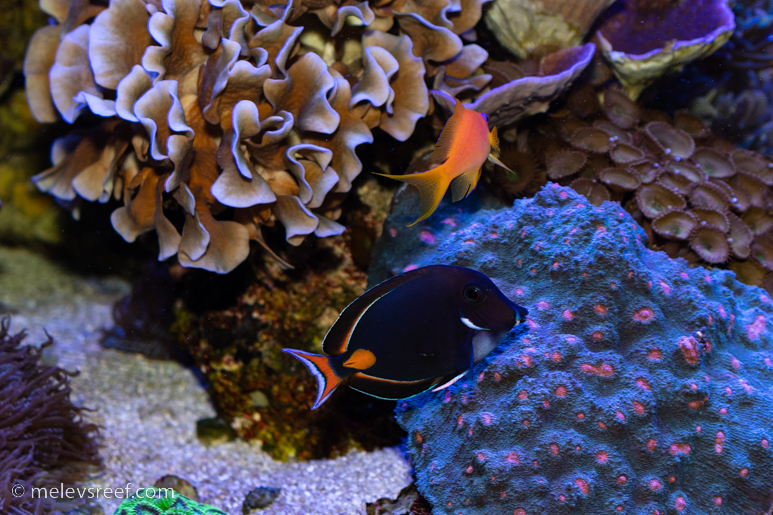 Watching my reef fill in over the past 12 months has been a great pleasure, and I always take the time to enjoy  the colors and shapes of the corals, appreciating their beauty.