I've never been one to shy away from Lanthanum chloride, a product used in our hobby to bind up and export phosphate from a reef tank. Not only did I feel like I'd found the magic elixir the first time I used some, I've been a huge advocate for more than a decade. Two months ago at MACNA, Two Little Fishies introduced their version to the attendees named Phosban-L.  Phosban has been a powdered version of GFO for a long time, used in a Phosban Reactor or similar device. Phosban-L is not just a liquid additive, it's a bottle of concentrated Lanthanum chloride. This isn't really a product review, it's more about my thoughts on this topic.

I've been using it now for a few sessions and have enjoyed the same excellent results as I have with other similar products such as Phosbuster Pro (by CaribSea) and Phosphate Rx (by BlueLife USA). You have to mix Phosban-L with RODI water to create a solution you will drip into your system. I've seen and heard heavy warnings about using it very very very slowly, dripping it into a super fine micron sock.  The finest micron available at this time that I'm familiar with is a 10 micron sock.  In comparison, the average filter sock is 100m to 200m, so you must seek out a 10m sock when dosing this product. And when they say very slowly, they mean it. "It should be dripped ever so slowly into a filter sock" over a period of DAYS, not minutes, not hours.  That's exceedingly cautious to me, but then again any time anyone utters the word Lanthanum, people seem to come out of the woodwork stating how careful you need to be. I'm not saying they are wrong, but they are never referring to Phosphate Rx -- because I've asked them to be specific about what they are talking about.

That being said, I'm not nearly that cautious with this product as they are directing. Perhaps being a 20-year hobbyist that has used some form of Lanthanum since 2005 until now has erased any concern, not to mention how many times my livestock has been exposed to it without any socks to trap it whatsoever.  Let's say I used a product every 10 weeks; that's five times a year.  5 treatments x 13 years is 65 sessions, and I'd say realistically I've probably used it more like 75 times.  The bulk of those (at least 60) dosings were done using Phosphate Rx, because I just love that product.  You don't need a reactor, nor deal with all the steps involved with utilizing GFO. You simply drip it into the skimmer section of your sump or right into the display, and a few hours later the water is clear and the PO4 has been exported by a protein skimmer.

About 18 months ago, BlueLife started selling 10 micron socks. Since I'd dosed for over 10 years without using one, I asked what the reason for this was. Primarily it was for safety concerns, but to me the benefit is help avoid the cloud in the display tank in the first place, or helping it be removed more quickly.  When you think of aquariums on display to the general public, they have to have crystal clear water every day, so using a 10 micron sock assures the water clarity remains intact even when treatment is going on in the background. I've used such a sock a handful of times, but realistically for my reef it simply seems unnecessary.

Enter Phosban-L. With the warnings I'd read, I wondered if I was being too casual about this.  I've used the product four times, in two different systems. And here are my notes:

I dosed 60ml on three different occasions with excellent results. I happen to have a handy 60ml syringe, and pressed the plunger gradually to trickle the solution into an area of high flow in my reef over a period of two minutes.  The water got cloudy initially; it cleared up within a few hours. No sock was used. I've dosed this solution at night, and I've used it during the daytime-period. I don't believe it makes a difference what time of day you use these types of products, but my preference is a night when my fish are asleep so I don't have to look at a white cloudy tank.

One 500ml bottle makes 1500mls of solution, or 25 doses for my own system. That's economical for a larger reef, for sure. People with big reef tanks will like this very much.

I also used it in my frag system to see how it would work: That system has a 60g liquid water volume and it measured .1ppm PO4 before I dosed.

I dosed 7.5ml which was really more than was needed since the tank only measured 0.1ppm; and that particular night / the next morning my skimmer overflowed which dumped whatever was in the cup into the sump again, including whatever LaCl it had exported during the night.  I cleaned up the mess, got the skimmer running anew, and tested the water a few hours later. PO4 measured 0 on my Elos test kit.

I'm very pleased to report how nicely this product worked for me, and I'm sure I'll use it again.  But for the average hobbyist with a more normal-sized aquarium, I'll continue to recommend Phosphate Rx to them because there is no mixing required, and the warnings are far less ominous.  All my treatments with Phosban-L have been at 50% of what is recommended (because the Po4 level wasn't high enough to justify using more per treatment). If you are trying something new I'd urge you to use it at 50% strength to familiarize yourself with how it works, and dose a couple of times over a period of a few days instead of trying to use something brand new all at once.
*** Unlike buying products from pool suppliers or hardware stores, I'm glad more products made for the aquarium are becoming available that are designed for us to use without trepidation, because our livestock continues to remain safer that way.  Why risk their lives to save a few pennies or dollars? Here are the items I discussed in today's blog, all available in my shop: 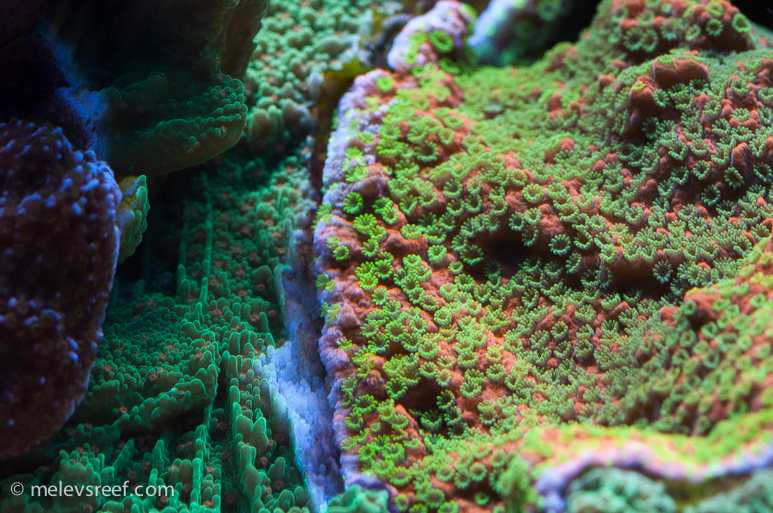